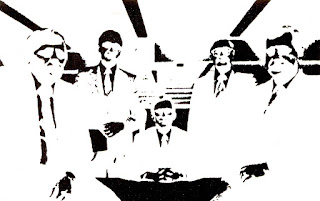 The dream was so intense I felt I had to do something with it, and in the course of the year the poem became the lyrics of a song. A song of which the music changed and changed until it finally felt right. But what to do with the song?

From band to studio project

It had to be performed, and it had to be recorded. To do that, I needed a band, and the band would need to be called De Kroonluchters (The Chandeliers), as dictated by the poem. But to start a band I would need more than a silly song about chandeliers that was just four lines long.

I started to write more songs. However, when I had created an hour or so of music, I felt that each song needed a different instrumentation. A band would be useless, what I needed was much more complex: a studio project.

Around that time (1979) Dutch rock bands singing in Dutch rather than English were becoming all the rage, and many Dutch language love songs topped the charts. I sure liked the idea of Dutch language lyrics, but love songs? My musical heroes were Frank Zappa, Captain Beefheart , Syd Barrett and The Velvet Underground. My band had to be really different from the ones topping the charts.

The first musician I recruited was my girlfriend Mirjam de Vriend. She was a kindergarten teacher, and I had her read my gruesome story of Piep de Muis (Squeek the Mouse) as if it was a wholesome story for little kids. She also did the background vocals on various songs.

For Piep de Muis I wanted a coda that was repetitive and would seem to go on forever, like the ending The Beatles created for All you need is love. The best person for that purpose was Marius Lutgerink from Leiden. He was a folk musician, and played - and even built - various medieval instruments. The unusual sounds that start building up after the story has finished are his, performed on the fiddle and the hurdy-gurdy.

The hurdy-gurdy is a primitive string instrument that sits on your lap; the sound is created by a rotating drum torturing the strings and creating an eardrum-piercing sound, harsh enough to kill all life within a radius of five meters. The increasingly dissonant interaction between that hurdy-gurdy and the fiddle is responsible for the apocalyptic ending of Piep de Muis.

The chandeliers from my dream referred to enlightenment, that's how I saw it at the time. That's why a few songs on the album had to be about that subject, and Witte vlinder (White butterfly) was the first one. It was conceived, and initially recorded, as an acoustic song with me on vocals and guitar. The white butterfly of the title refers to the mantra you can use as an inner compass when you do meditation.

Later I was unhappy with the result; I felt the song needed more body. That's why I asked Niko de Vos from Rotterdam, an excellent bass guitarist and a great drummer, to add bass and drums to the track.

It was only then that we discovered that my performance of the song was incredibly unstable, so Niko had to remember every single time I messed up the tempo to make his bass and drum parts match the rest of the song. The end result was strange and wobbly, like some of the songs on Syd Barrett's solo albums.

Another song relating to enlightenment is De Hartgrot (The Heart Cave). It's an instrumental song performed on empty beer bottles and cymbals. The title refers to the Gurbani, the hymns that are part of the holy texts of the Sikhs in India. The Heart Cave is the place where the Self resides.

Speelgoed (Toys) was about toys coming alive and wiping out the children that had abused them for so long. To create the required atmosphere I needed someone else to sing that song, and that someone was Adam van Doorninck from Leiden.

He was a big man twice my age, who was traumatised by WWII. In the studio, when waiting for his turn, he would fall asleep, then wake up screaming because the bombs were falling. As will be immediately clear from the recording, Adam had never sung in his life, let alone think about timing. He wasn't Frank Sinatra - and that's exactly how it was meant to be. Adam was the Dutch equivalent of Wild Man Fischer.

The lyrics of Kroonluchters (Chandeliers), the title song, consisted of only four lines, way to short for a proper song. I solved it the Zappa Way: by adding a long guitar solo. That solo was to be performed by Andy Turnbull, an Englishman who had come to Leiden to find a job. On his first day of work he had an accident, after which he was unable to work. He found himself with lots of spare time, to be filled with Girls and Guitars. He lived in a posh squat house, which he and his English friends quickly turned into a garbage-infested ruin.

When we recorded his part he was so nervous (he had never been in a recording studio before) that he kept forgetting when to start and stop. After several false starts we agreed I would kick him when he had to start, and pull his right hand (holding the plectrum) off the strings when he had to finish. The latter caused the rather abrupt ending of his absolutely fantastic solo.

The vocals were done by everyone who happened to be in the studio at the time of recording. My instruction was to make it sound like everyone was drunk, or under the influence of illegal substances. And yes, those instructions were executed with great enthousiasm.

Kinderen van de rekening (Footing the bill) was a protest song. I felt that the materialistic lifestyle of the generation of my parents was destroying the earth, leaving the younger generation the victim of pollution and climate change. The lyrics tell the story of an increasingly hostile earth, slowly turning kids into desperate, zombie-like creatures.

Daar zijn leuke liedjes was recorded and mixed in 1979 across several weeks at the Geronimo Sound Studio in Leiden, owned by Cees Zwaal and Coen Bais. The project cost me 2000 guilders (no euro yet at that time) and a lot of sleepless nights to get everything organized. The studio would go bankrupt soon afterwards, and Coen Bais would make a name for himself as a New Age musician.

In 1982 I met Ron Konings, who owned a recording studio in Vrouwenpolder in the province of Zeeland. He was great in turning vague concepts of musicians into concrete results on tape. In two days we remixed Daar zijn leuke liedjes, and the result was not only much better, but also much weirder. And at times quite disturbing. Which was exactly what was needed.

After that Ron would mix and master every single release of Kubus Cassettes. He was (and is) the Master!