In the mail today: another giant cardboard box full of cassettes. For distribution. On the photo you only see the top layer, but the box is three layers deep! 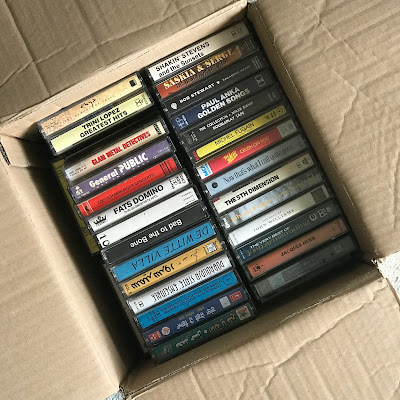 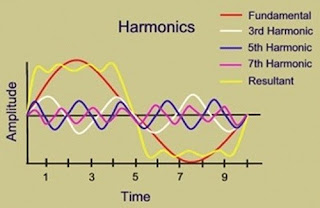 Most of the music I was involved with was the result of my investigations into musical time, musical space, and harmonics.

Speeding up or slowing down music alters the acoustics of the space the music is performed in. If you slow down music, for example by halving the playback speed on a tape recorder, reverberation times related to the size of the room will double, and the room will seem to have increased in size.

Duration of a composition will also double, and the pitch of all instruments and voices will sound one octave lower. Women's voices will be magically transformed into men's voices.

The timbre of the recorded sounds will also change. This happens because timbre is largely determined by the relative position and volume of the harmonics, and when you halve the speed of a recording all harmonics will drop one octave.

A strange effect of slowing down recorded speech is that the speaker seems to be unable to open his mouth wide enough to articulate properly. He seems to mumble, and is hard to understand.

Slow down speech even further, and it is turned into a slow, threatening, dark, creepy slur from the Netherworld, uttered from a mouth that practically seem unable to open at all!

For me, discovering all this stuff was incredibly exciting. It led to a wealth of new musical possibilities that I investigated extensively between 1979 and 1984, and the best results found their way onto various Kubus cassettes.

Metaal (Metal) and Vertraag-de tijd (which means Slow down time as well as Time slowed-down) resulted from time delay experiments; De lege aarde (The empty earth) on Leven na de bollen (Life after the spheres) and Digit 2 from experiments with harmonics. 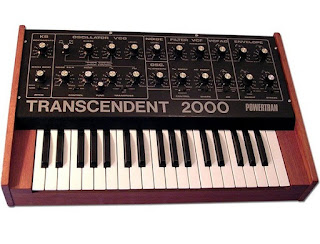 Ah, the Transcendent 2000! In the late 1970s the synthesizer was offered for sale as a DIY kit at a very attractive price. My friend Rik Neuteboom, who is a technical guy, bought it and managed to build a fully functioning synthesizer without too much trouble. After that he didn't really know what to do with it, and sold it to me in 1980. Lucky me!

In discovering the possibilities of the machine, I produced Leven na de bollen (Life after the spheres), the third release of Kubus Cassettes. Two long tracks that, following my initial settings, practically composed themselves. Was the T2000 alive?

The more I got to know that machine, the more I felt it had arrived from the future, like that other T2000, the Terminator that was sent back in time to eliminate Sarah Connor. I could construct my own sounds from scratch - even sounds that couldn't be produced by the existing acoustic instruments. Even better was that it had an audio input, so that you could feed external audio sources to the filter section, which turned the T2000 into a musical warp drive!

And now, in 2019, I live in the future of 1980. There's artificial intelligence, there's machine learning, there are neural networks, and much of it is available at a very low price, or even for free, thanks to the cloud services of Google, Microsoft and Amazon.

The way we compose music is changing: there's more machine intelligence, and less human input. Where will it end?
at August 06, 2019 No comments: 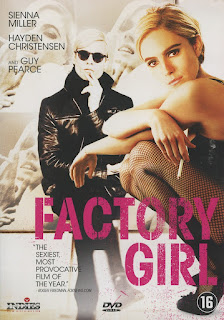 Back in the day when I was working on what would eventually become Kubus Cassettes, I was completely obsessed by Andy Warhol. His art, his movies, his books - everything. The Factory, The Velvet Underground & Nico, Edie Sedgwick, Gerard Malanga, Billy Name, etc.

I was totally in awe of the flow of creativity then and there, and a lot of inspiration for the things I was doing myself came from discovering what had been going on in New York some ten years earlier.

That there also was a dark side to all this I discovered last night, when I saw the movie Factory Girl on DVD. Great to see the total freedom and creative atmosphere of the early days of The Factory, but scary to see how it deteriorated into decadence, drugs, pain and suspicion. With beautiful Edie Sedgwick as the victim of all this.

Apparently, for Warhol the people surrounding him were just decoration, tolerated as long as they amplified his fame, dumped when their star didn't shine so bright any more. As happened to poor Edie.

But in spite of all this, Andy remains one of my heroes. He put the art scene on its head, and opened the eyes of millions of people for the fact that art could be contemporary, colorful, crazy, and innovative.

Test prints at The Printerette


Went to The Printerette to test-print some of the cassette cover designs I created in PhotoShop. Had them printed on various kind of papers: thick and thin, white and off-white, etc.

I had taken the PhotoShop files with me, but the lady at The Printerette told me that I should have made PDFs, because the font I had selected on my computer at home was not present on the computer connected to the printer.

So the covers were printed with an incorrect font, which was nevertheless good enough to try out the various types of paper, and the quality of the printing.